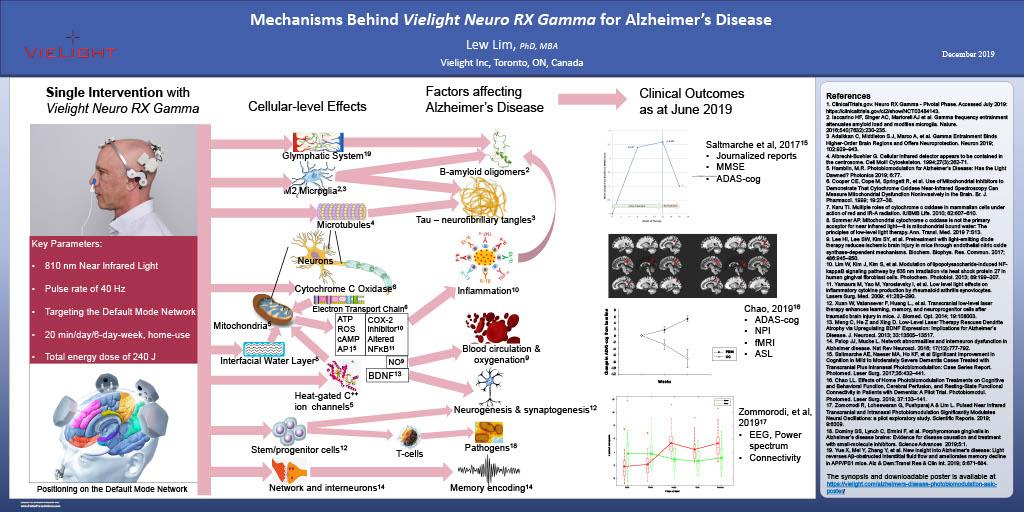 The Vielight Neuro RX Gamma is a home-use device that is subject to a pivotal clinical trial to indicate for Alzheimer’s Disease (AD). Information is accessible at ClinicalTrials.gov. The pivotal trial is expected to complete in 20221.

The basis of the technology is near infrared light (NIR) light delivered to the brain, a process of photobiomodulation (PBM). It is intended to produce improvements in AD symptoms.

Photobiomodulation (PBM) in this presentation concerns the delivery of near infrared (NIR) to the brain to treat Alzheimer’s Disease (AD) using a home-use device, the Vielight Neuro RX Gamma. The key parameters are wavelength of 810 nm, pulse rate of 40 Hz, targeting the default mode network (DMN) for 20 minutes, delivering a total of 240 J. A similar device is in a pivotal trial expected to complete in 20211.

Recent animal research on flickering light at 40 Hz processed by brain areas have shown significant reduction in β-amyloid deposits through the activity of microglia2, presumably of the M2 non-inflammatory phenotype. Positive effect is also found for a tauopathy animal model3.

Microtubules provide the structure for the neuronal cytoskeleton. Their disintegration from tau protein abnormalities lead to neurofibrillary tangles. It has been found that the centrosomes in microtubules are able to detect NIR at 700-900 nm4 leading to discussion that there are positive implications for AD.

Much of PBM mechanism discussions have centered around the activity of the mitochondria which are numerous in eukaryotic cells such as neurons. The process produces key signaling molecules in adenosine triphosphate (ATP), low-level reactive oxygen species (ROS), cyclic adenosine monophosphate (cAMP) and activator protein-1 (AP1)5. An enzyme in the mitochondria membrane, cytochrome c oxidase, is considered a major chromophore for NIR photons6, acting as a photo-acceptor and signal transducer7. Calcium ion gated channels are directly activated by shorter wavelengths (blue) and longer IR wavelength activate a transient receptor potential (TRP) to activate the calcium channels5. NIR can also reduce the viscosity of Interfacial water layer, increasing ATP and cell proliferation8. PBM releases nitric oxide (NO) from the respiratory chain, activating vasodilatation, improving blood circulation and oxygenation9. Red light irradiation is found to be anti-inflammatory through the inhibition of the cyclo-oxygenase 2 (COX-2) enzyme by decreasing intracellular ROS10, and also altering NFKB activity11. Mice with brain injury treated with PBM increase progenitor cells in the dentate gyrus and in the sub-ventricular zone12. PBM has been shown to support the brain derived neurotrophic factor (BDNF) pathway, thus positively affecting dendritic morphogenesis and improved neuronal connectivity13. The presence of endogenous gamma oscillations has been found to correlate with higher quality memory encoding through interneuron and network-level activities14. PBM has also been associated with producing stem and progenitor cells that can develop into new T-cells to attack pathogens, a relatively new discovery in AD research.18

One of the first human trials of PBM for AD was reported by Saltmarche et al who treated a case series of five patients diagnosed with mild to moderately severe dementia with an early version of the Vielight Neuro. Functional and behavioral improvements were journalized and cognitive improvements were measured in MMSE and ADAS-cog scores15.

Chao published a pilot trial testing the effects of home PBM on cognitive and behavioral function, cerebral perfusion, and resting-state functional connectivity in eight patients (four PBM and four usual care) diagnosed with dementia. Significant improvements were observed in all the participants on real devices, measure in ADAS-cog scale, supported by fMRI and ASL imaging16.

A controlled study on healthy participants showed that inducing the parameters of the Vielight Neuro Gamma on healthy brains increases the power spectrum of the higher brain oscillatory frequencies, alpha, beta and gamma, and reduces those of the slower frequencies of delta and theta17.